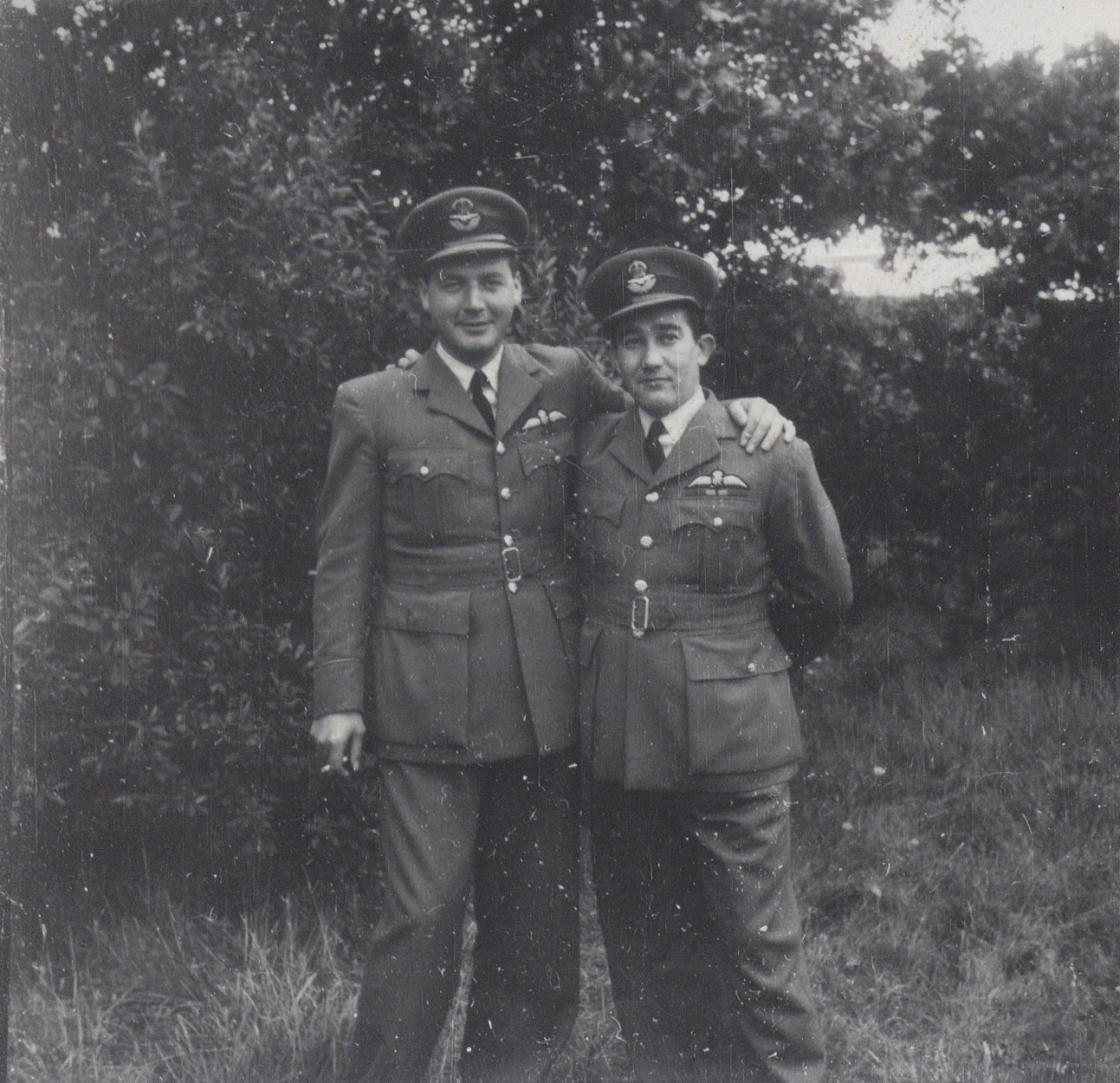 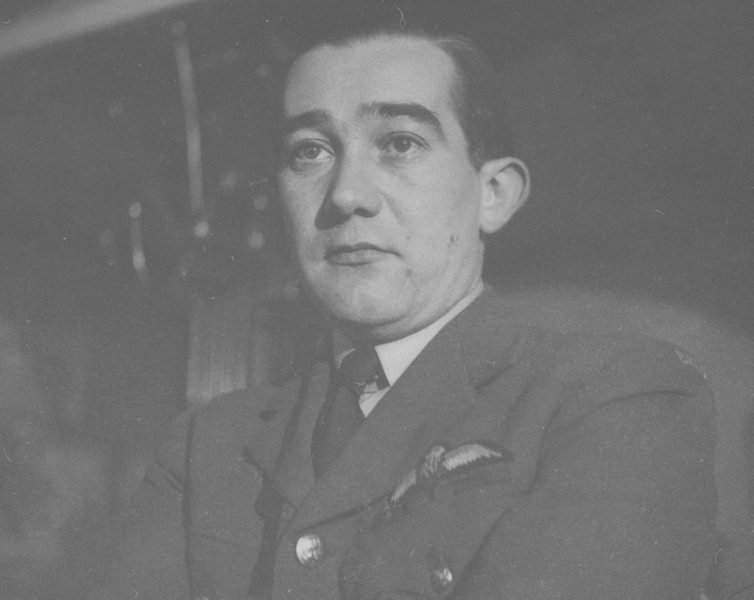 They found the body of their father, a hero of the resistance, after an incredible search.

This is the end of a long but beautiful and touching search inspired by the love of three girls for their father who was a real hero as a soldier and also for their amazing mother who raised them courageously after the loss of her husband. On Tuesday July 24th Major Charles de Hepcée was buried next to his deceased wife Baroness Micheline de Selys Longchamps whom he married in 1936. He disappeared in 1944 in German imprisonment in Toulouse (France).
Charley de Hepcée was born in Brussels on March 14th 1911. He followed a training at the Royal Military Academy where his leadership capacities were soon noticed. He belonged to the 76 Promotion Infantry and Cavalry and was promoted Under Lieutenant in 1932 before he went to the Aviation school. 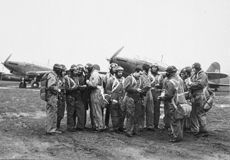 When Germany invaded Belgium on May 10th 1940, he was the commanding Officer of the Fifth Squadron of the Third Aeronautic Regiment. After accomplishing some reconnaissance and defence missions he was forced to retreat after the capitulation of Tours and Moissac in the Garonne area. The German Kommandatur ordered him to force his men to return to Belgium in uniform, to give in their weapons and to surrender in order to be transferred to a prisoners of war camp. In a last message to his men he stipulates that he only follows the orders of his Belgian superiors and that “to surrender” wasn’t one of them. And he ends with the words: “Follow your conscience….. Don’t’ go….. Put on some civil clothes. Farewell my friends, May God bless you.”
Charley was not a man you could force to surrender. He left Brussels and went to live with his parents-in-law in Halloy (Ciney) where he posed as the forester. This was a way to join the resistance and to help with different information and sabotage tasks. He also started the founding of a home which would take care of Jewish children. 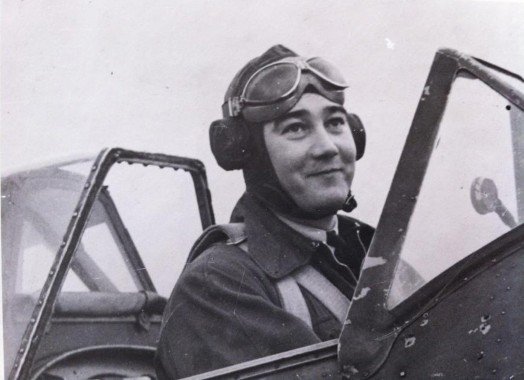 The maid…. A spy for the Germans

Shortly after his mother-in-law took in a new maid who appeared to be a spy for the Germans and who had  to keep an eye on Captain de Hepcée. Once he got to know this Charles de Hepcée escaped to France, where he started the underground network “Rose Clair” (named after this daughters) with his friend Anselm Vernieuwe. The purpose was to organize an escape route to London via France. After some contacts with William Ugeux (Walter) “Rose Clair” became a commando post within the underground group Zero whose range of action went from Belgium to Spain via Paris and Lyon.
In 1943 de Hepcée, who changed continually his identity became the leader of the network Pyrénées-Orientales. He organized with the help of Dr Schepens and his friend Vernieuwe the escape route “l’Iraty” between France and Spain.

Ugeux appreciated de Hepcée enormously. In a letter of May 18th,1943 in which he nominated de Hepcée for receiving the War Cross for his great leader capacities he specially mentioned “that without the several crossings of French, Spanish and German control posts of this officer, who showed no fear for death, the line France – Great Britain would have long been closed”.

Hunted by the Gestapo

Charles de Hepcée succeeded in passing the Pyrenees 12 times and the demarcation line 20 times. In the beginning of 1943 he was arrested for the first time near Figueras. He could escape together with a companion in March 1943 and a while later he could prevent a second arrest. As he was hunted by the Gestapo the only solution was to escape to London where he joined the Belgian pilots at the RAF on May 13th. Earlier he had been appointed as member of the New Commonwealth Society and he had received the “War Cross 1940” for his active battle against the enemy and his dedication to resistant organisations.
On May 14th, 1943 his wife Micheline was captured together with his children and their nanny near Grenoble and they were imprisoned in Fresnes. Micheline was deported to Compiègne, Neuengamme, Ravensbrück and later Bergen-Belsen. (She survived the camps and once liberated in 1945 she would do everything within her power to find back her husband, who had disappeared without a trace in 1944). Charles de Hepcée was only informed of her arrest on November 6th 1943 by Commander Leprince. Four days later he found out that his younger brother Michel, a pilot at the RAF, was missing.

In spite of these encounters de Hepcée took the responsibility for the mission “Roch”, where he and two other agents put up a special route, independent of the already existing escape routes between Belgium and London.  On May 12th, 1944 he arrived in Lisbon where he had to deliver secret reports. On his way back to Spain, passing the Pyrenees, he was deliberately misled by his guide who led him into occupied territory. There he was arrested by the German customs. He pretended being an American pilot, but he was known in the area under his real name and above all he had incriminating documents and large sums of money on him. He was handed over to the Gestapo of Saint-Girons and was transported to the prison of Saint-Michel in Toulouse. From that moment on there was no news any more of Charles de Hepcée. Much later it would appear that de Hepcée had been murdered together with (according to the Nazi’s) 4 French terrorists after a month of questioning and torturing. Nobody knew or wanted to say what had happened with his body after the execution. It was only in 1952 that his death was officially recognized and it would take another five years before an official inquiry was set up. But his children never gave up. They wanted to know what had happened to their father, where they father had been and looked everywhere where he could have stayed: in Saint-Girons, in a Polish or German camp….. some even pretended that he was brought back to Belgium. But without any result…..

The DNA analysis and the permission of the deceased

In 2007, Anne Riou of the University of Toulouse and two Catalan researchers create a website dedicated to the French escape networks. They also mention the name of “Charles de Hepcée”. And from then on it goes very fast.
In 2008 the relatives of de Hepcée meet the researchers and together they visit “Son”, the last village where de Hepcée stayed before he crossed the border. They visited the “belle chamber”, the room where he stayed in total discretion. 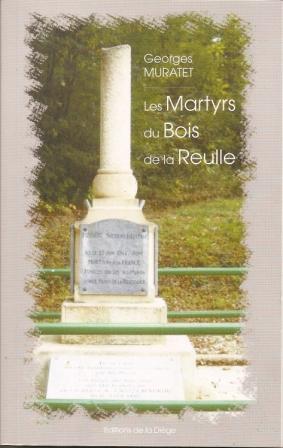 Is it a coincidence or is it the Providence, but by a wrong tip the family de Hepcée arrives in Castelmaurou where the name of Charles de Hepcée is mentioned in different post-war archives. In Town Hall they refer to the book of a local amateur historian Georges Muratet : “Martyrs du Bois de la Reulle”. In that book the execution of some 20 persons by the division “Das Reich” is described. The bodies were excavated at the end of the war, they were examinated, pictures were taken of them and they were reburied in Toulouse. In 1990 the bodies were transferred to the cemetery of Castelmaurou. According to Muratet 5 bodies couldn’t be identified and still according to the historian, one of the bodies could have been that of the Belgian pilot Charles de Hepcée.

The children of de Hepcée are finally hopeful. A DNA analysis could give a decisive answer to the question if their father was buried alongside the unknown executed victims. It was although not simple to exhumate the body for investigation. They had to be able to prove that the body which had to be examinated was that of Charles de Hepcée or that the deceased had given his permission for the exhumation! They needed a judicial decision for it. 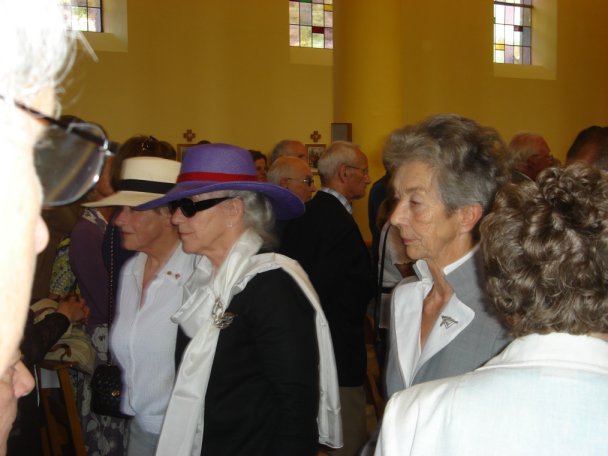 According to the data noted down by the first exhumation after the war, it seemed that body n° 43 could be that of de Hepcée according to height. The clothes that were found and the rosary with medallion pointed also in that direction. But there was a problem with the date. According to witnesses the captain, alias René left the prison on June 29th and was executed the same day. But the execution in the Bois de la Reulle took place two days earlier!
The German witnesses about the stay of de Hepcée in prison were so vague that there could be given no decision if the body was that of de Hepcée. So there was given no permission for the exhumation.

The children  don’t give up

The children of de Hepcée did not agree with this decision. In 2009 they got a letter from the Institute of Forensic Medicine in Straatsburg stipulating that DNA analysis was not possible as this case had not been mentioned in the law. But a letter of the Ministry of Justice from February 11th 2010 denied this. The identification could be seen as historical scientific research and then the permission of the deceased was not necessary as death took place before 1994, the year in which the law came into force. The Institute of Forensic Medicine didn’t agree and required an official judicial demand from the Court of Toulouse.
In 2011 the family lost all hope after receiving a new letter, this time from the Ministry of Veterans, in which was stipulated that there could be given no permission for DNA analysis on bodies of military people or civilians who had been executed during the Second World War. But once again the family de Hepcée didn’t give up.
Thanks to the discovery of new documents they were able to prove beyond question that their father had been released on June 27th, the day of the massacre in the Bois de la Reulle. The mayor of Castelmaurou could no longer refuse to give permission for the exhumation. This happened eventually on November 21st, 2011 in presence of local, judicial and scientific authorities, and also in the presence of Georges Muratet and Rose de Hepcée and her husband.

And finally after some more administrative troubles the laboratory of Straatsburg and Epinal were able to confirm on the hand of DNA research that there was a direct link between Rose de Hepcée and body n° 43 of the executed persons in Bois de la Reulle. 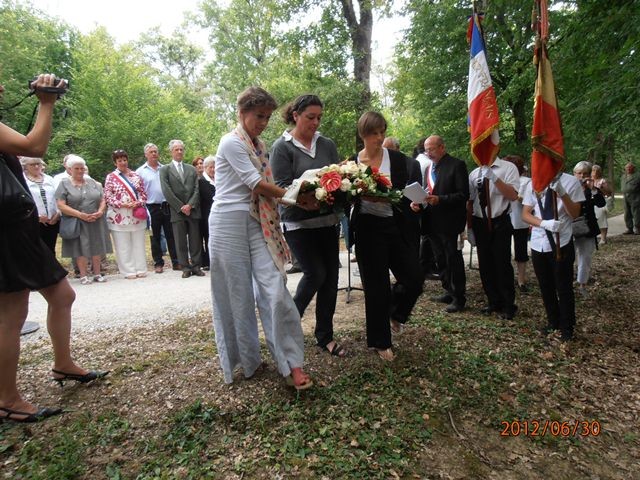 On July 24th he was buried alongside his wife on the family graveyard of Halloy-Braibant, more than 68 years after he was executed in 1944 near Toulouse. 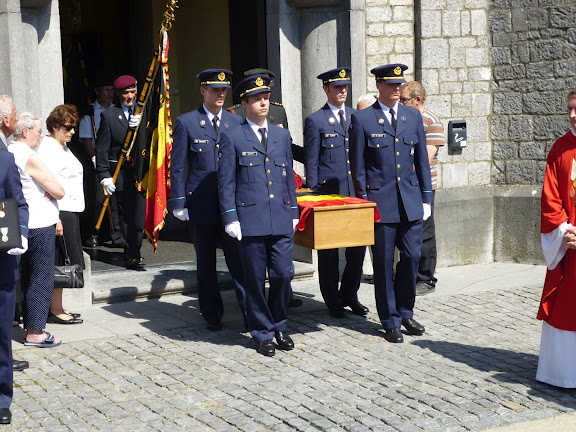 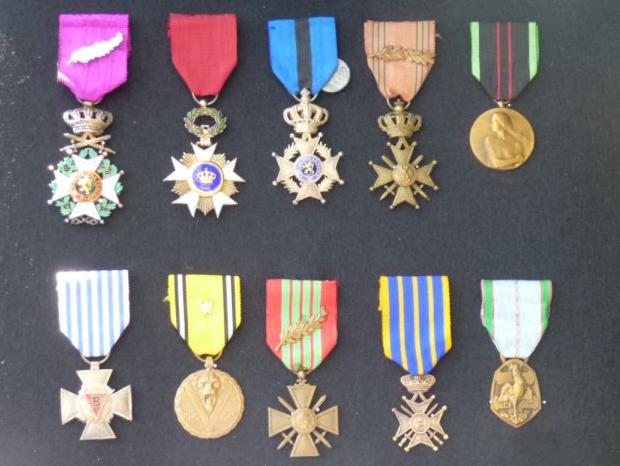 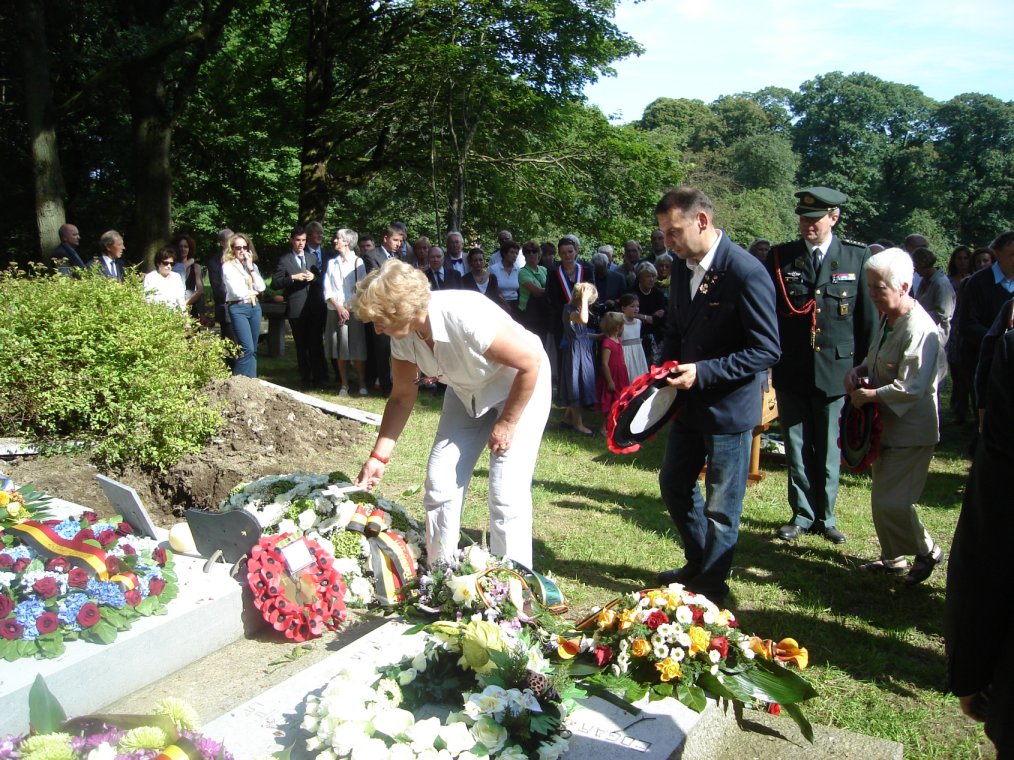 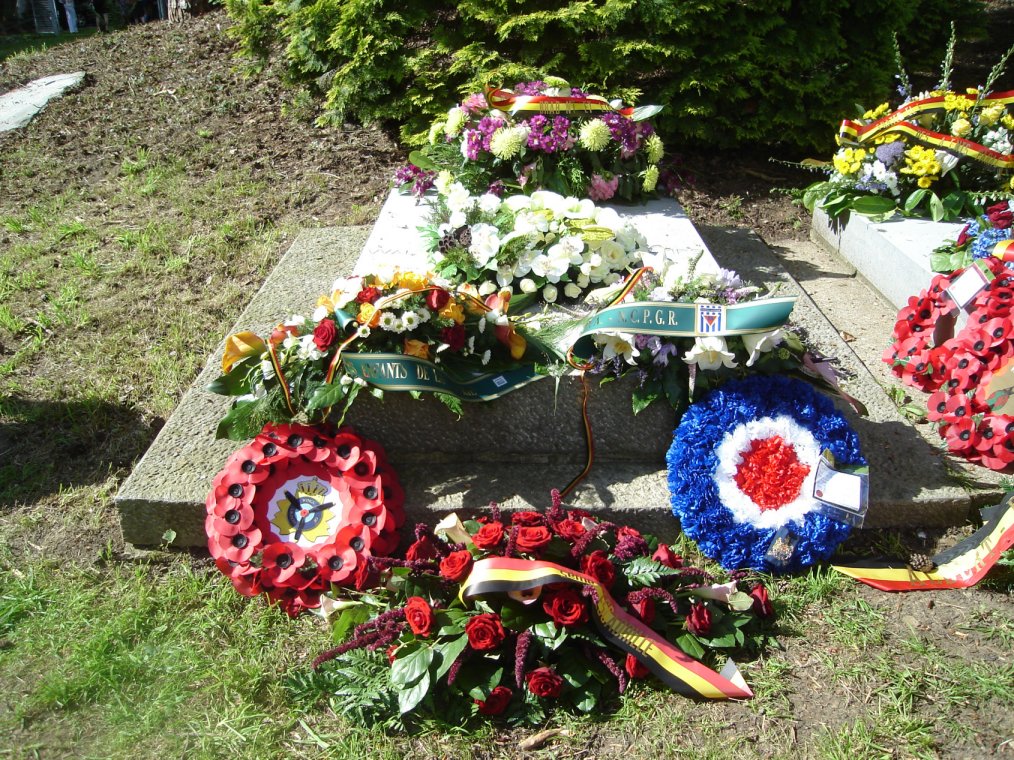